Okay. It’s round one of your fantasy football draft. You’re up and you want to draft THAT ONE guy who is going to carry your team to the championship and you’re wondering… who should I draft? Is now the right time for a tight end? Should I wait?

It’s not crazy to select a TE in the first round. If you haven’t selected one by the end of the second, you may be at a serious disadvantage.

Following this strategy, I’ve selected a tight end (TE) in the first or second rounds several years in a row. The expected value of the top TE available early in the draft can be as much as ten points a game more than those available later. Think Gronk, Kelce, and Graham in his prime with the Saints. Over the course of the season, their point total is double those outside the top five. Here’s another way of looking at it: a ten to twelve team league, you have a ten point heads-start over half the other teams. Below is a box plo of season totals for TEs (first 16 games, 1 PPR). 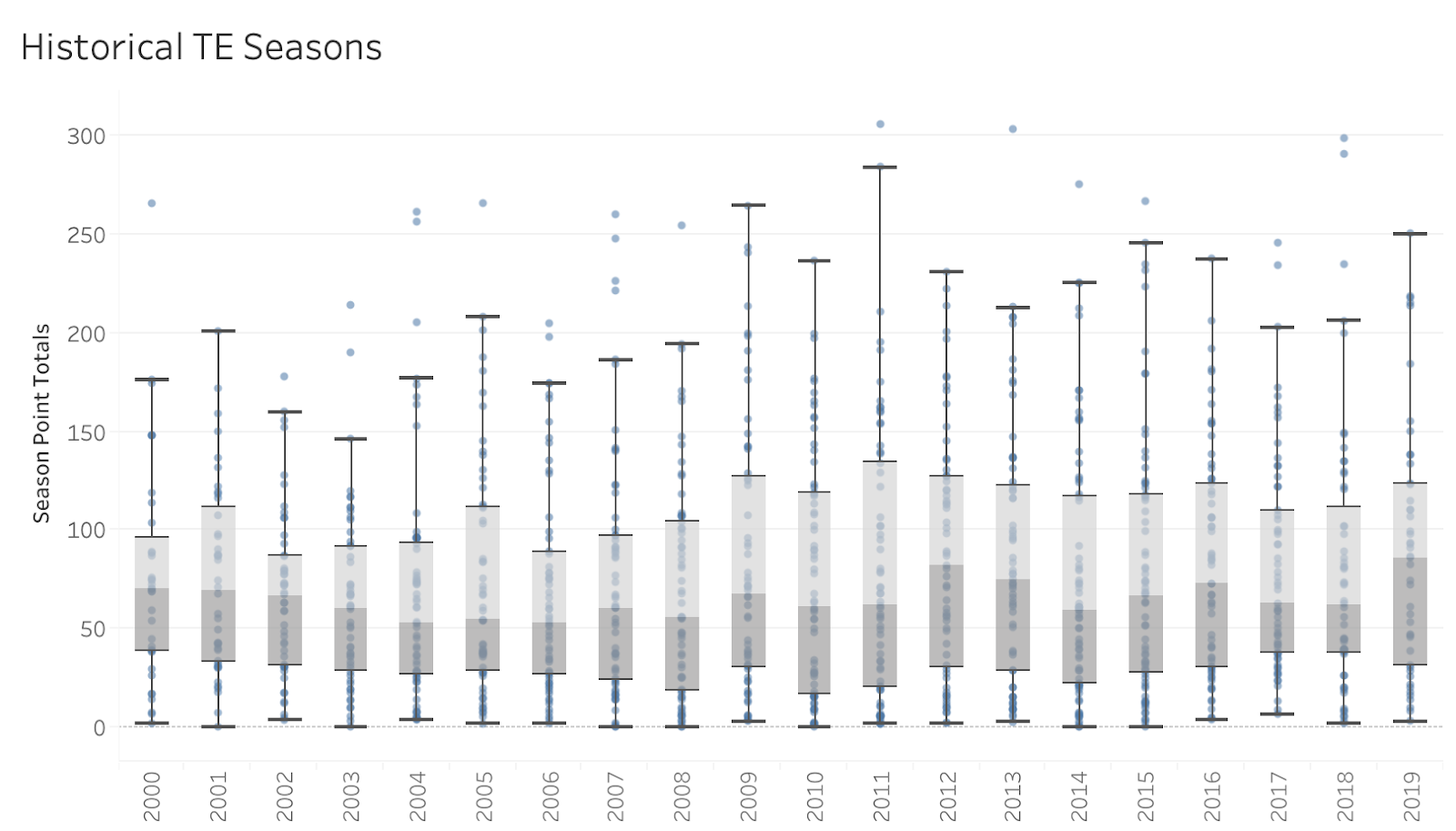 Wait, does that work?

This strategy plays out better in some years than others. In 2010, 2012 and 2019, the best-performing tight ends only out-performed the next tranche by 30-40 points in total. Only 3 points a game, which may not be worth a first-round pick. Here’s a look at how point totals played out in 2019:

In 2011, 2013, and 2018, however, the top one or two tight ends outperformed the next pack by about 100 points in total (six points a game). And outperformed the median – the type of TE you can pick up in a bye week – by 250 points. That’s 17 points per game! That kind of head start is really challenging – if not impossible – to overcome. In 2018, Ertz and Kelce were far ahead of the rest of the league. Check out how their lead over Hooper and Rudolph, the 6th and 7th best that year:

TEs in the End Zone

Being able to consistently count on a TE for a TD a game makes up for the fact that TEs typically have fewer yards than a WR. There’s a relationship too between yards and TDs, but this is stronger for some players than for others. Take a look at the general trend below:

In a 550-yard season, we’d expect four TDs. In an 1100-yard season, we’d expect eight. Several outstanding TE seasons (Gronk in 2011 & 2014, Graham in 2013) were far north of  the trend line.  Graham in 2013, had nearly double the number of TDs we’d expect given his receiving yards (fifteen when we’d expect more like eight). Similarly, though he didn’t have the receiving yards, Julius Thomas in 2014 was a magnet in the end zone – twelve TDs when we’d expect four, given his yardage. Players south of the trend line have fewer TDs than we’d expect. An extreme case in Kittle in 2018, when he had half the TDs we’d expect (four vs. expected nine).  Witten was another frustrating player for owners in both 2012 and 2009, with nearly 1000 yards but only 1 or 2 TDs. Just not what Romo was looking for.

This leads me to another point. WIth so few TDs in a season, performance can be lumpy (yes, that’s the statistical word for it: lumpy). We can’t just evaluate TEs by their season aggregates. It’s also about consistency game over game. We’ve all been burned by a flukey 2 TD game (See Brate, Cameron in 2018 and 2017. In both years, the dude had 2 TDs games late in the season, when he was probably on your bench).

I mentioned earlier that Kelce didn’t have the lead in total points scored in 2019 to necessarily warrant a first or second-round pick. But, he was much more consistent than other TEs. I could count on him for about 15 points. In his worst week, he had just under ten. Compare that to an Olson or Higbee. Yes, they both also had a 25+ point game, but they also had a 2 point game. On balance, they were usually good for about 8.

Now, back to my hunch

Unless there is a very compelling player still on the board, leading the run on TEs pays dividends. In other posts, we’ll evaluate TE should be at the top of your list. Kelce and Ertz are the reigning kings, but a healthy Kittle or comeback-kid Gronk may be worth a shot.

View all posts by Mac